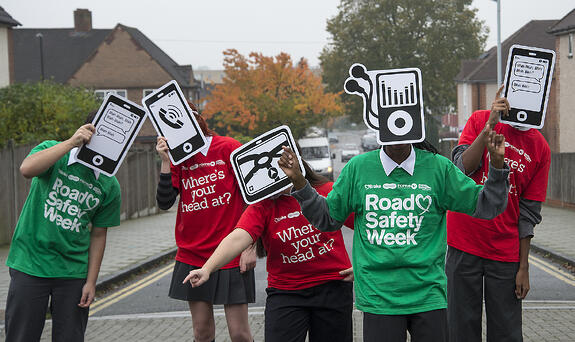 Believing we’re capable of doing two things at once is a common misconception that can get us into trouble in our daily lives, but on the roads it can lead to catastrophe. Yet statistics we released during Road Safety Week 2013, show the huge number of UK drivers kidding themselves they can get away with using their mobile or otherwise multi-tasking at the wheel – and how often they are putting vulnerable road users at risk.

Research funded by our Road Safety Week partners Romex shows there are 575,000 UK drivers with points on their licence for mobile phone use at the wheel or other types of driver distraction [1]. The vast majority of these drivers are male, so it’s mainly the male driving population who we need to get the message across to about the huge risk this poses. We also found through a survey of children, that six in 10 (62%) say they’ve been driven by a driver on a phone, while eight in 10 (79%) have spotted drivers on phones around their school and home [2].

We don’t know for sure how many casualties result from phone use and other distractions (as the figures aren’t available) but it’s estimated to be in the region of one in five [3]. We also know without a shadow of a doubt that drivers who use their phone at the wheel, even on hands-free, are putting themselves and others in great danger. The proven fact is that virtually none of us can successfully multi-task at the wheel [4], and using a phone makes you several times more likely to cause a serious crash that could cost you or someone else your life. It significantly hinders your ability to react and control your vehicle safely [5], posing a particular risk to people on foot and bicycle.

In fact, in many ways, using a phone or being otherwise distracted is comparable to drink driving in the way it affects your ability to respond to what’s happening around you. One study indicated that talking on a phone hands-free at the wheel slows your reaction times significantly more than if you were drink-driving just over the limit [6]. Yet many drivers who wouldn’t dream of drink-driving are happily taking and making calls, and maybe even checking or sending the odd text, when they should be focusing on the critical task at hand: driving safely.

If we are to stop people needlessly losing their lives and suffering life-changing injuries on our roads, then we must start taking phone use and other distractions at the wheel as seriously as we do drink driving. Both are reckless, risky and needless, and both can and do lead to tragedy.

[1] Analysis of Freedom of Information requests to the DVLA by Brake in August 2013.

[6] Using a hands-free mobile whilst driving can be more dangerous than drink driving, Transport Research Laboratory, 2009